The magic of Camp Aldersgate

There are numerous stories of how God has transformed the lives of people of all ages through Camping and Retreat Ministries. Here, Alicia Vélez Stewart reflects on her experience at Camp Aldersgate in North Scituate, RI. 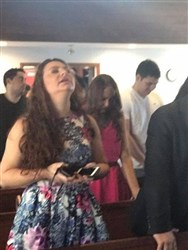 Hightlights from the NEUMC spiritual pilgrimage to South Korea

Back to [Sunday] School!

Tools to help you get ready to make disciples this fall…

Rolling Out the Red Carpet

While summer days might affect worship attendance (one way or another), remember we never take a vacation from sharing the love of God...

NEW - Resolution for the discontinuance of Grace United Methodist Church in Canaan, VT.

Presented by Members of the Grace United Methodist Church and the Rev. Dr. David Abbott, District Superintendent for the New Hampshire District of the New England Annual Conference June 2014 Whereas Grace United Methodist Church located in Canaan, VT, formerly known as Grace Methodist Episcopal Church began in 1874 as the first church in Canaan, VT; and Whereas the doors of the current facility were first opened in 1875; and  Whereas after many years of wonderful ministry, life changing mission,...

(Submitted by The Rev. Brigid A. Farrell, District Superintendent, Vermont District) WHEREAS the East Haven United Methodist Church located in East Haven Vermont, has existed for over 130 years with a long and proud history of mission and faithful ministry in the Northeast Kingdom of Vermont; and WHEREAS in their ongoing efforts to be faithful to God and responsible to their obligations they have re-created themselves several times over the years most recently in 2001 when they began to meet ...

NEW - Resolution for the discontinuance of the Maynard United Methodist Church in Maynard, Massachusetts.

Presented by members of the Maynard United Methodist Church and the Rev. Rene Perez, District Superintendent for the CMA District of the New England Annual Conference June 2014 Whereas the Maynard United Methodist Church located in Maynard, MA has existed since 1895 at the intersection of Summer and Main Street; and Whereas after struggle, prayer, and discernment the members voted at a Special Charge Conference on March 17, 2014 to discontinue the church as of June 30, 2014 after a final service...